The official boy scout uniform guide can be reviewed here.

Merit Badge Sash. If worn, merit badges are attached to front (and back, if needed) of sash. Venture/Varsity letter is attached at bottom front corner. Temporary insignia (camp patches, Totin’ Chip, etc. or additional merit badges) may be worn on back.  It is worn from the top right shoulder to the left hip.  The Sash may be attached underneath the Epaulets, or attached to the Epaulets with a special pin. 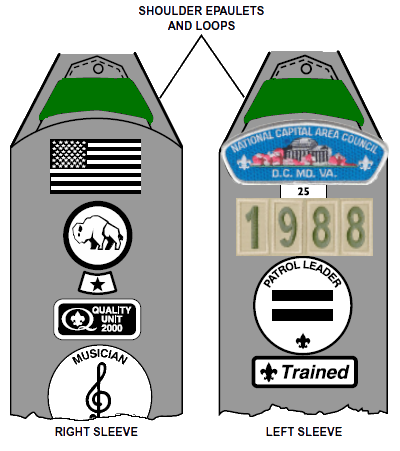 Left Sleeve. Council patches, unit numeral, and badge of office are worn as shown snug up, and touching each other. Badge of office is centered below and touches unit numeral. If the Scout is trained for leadership position, they may wear the “Trained” patch below the badge of office. The veteran unit bar (25, 50, 55, 60, 65, 70, 75, or 80 years) is positioned above and touching troop numeral and in turn touching council patch. Den chief cord is worn over the left shoulder and under epaulet. 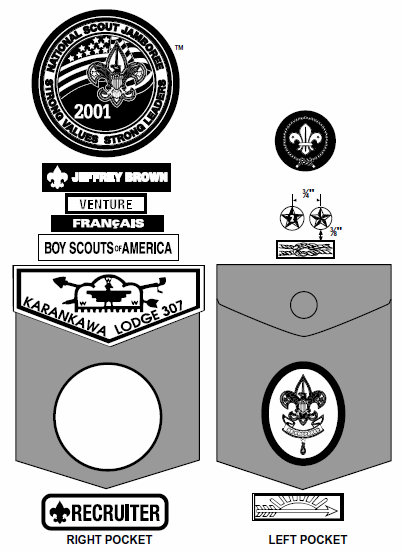 Left Pocket. Service stars above the pocket. If a medal or embroidered knot for youth members is worn, service stars are raised. Embroidered square knots are worn centered above the pocket in rows of three. Not more than five medals may be worn, pinned centered immediately above the pocket (extending over knots if both are worn). The wearing sequence for knots or medals is at the wearer’s discretion and lead color is to the wearer’s right. Badges of rank are worn centered on the pocket above the Arrow of Light Award. Flap buttoned. The World Crest is worn centered horizontally over the left pocket and vertically between the left shoulder seam and the top of the pocket.  If the scout has a “ring” patch, these are worn, surrounding the world crest patch.

Right Sleeve. U.S. flag. Only the most recently earned Quality Unit Award may be worn below patrol emblem or below National Honor Patrol star. Musician badge, if in band or drum corps, is worn 1⁄2 inch below patrol emblem. Up to six merit badges may be worn on the long-sleeve shirt in two columns of three starting 3 inches above the bottom edge of the cuff.

The shirt is to be worn “tucked in” to the pants or shorts.

Historic and previously loved uniforms are acceptable with patches worn similarly to described above.

Troop 1988 is once again meeting in person.  We have developed a plan for socially distant in-person meetings.

We are also open to new members and families who are seeking an outlet for activities and socializing for boys ages 11-17.

Troop activities follow guidance provided by the BSA, the CDC, and the Montgomery County department of Health.  Contact the Troop Adult leadership for more details.